Three Up
1. SM Northwest
After taking care of Leavenworth 34-0 on Thursday, the Cougars sit at 3-1 with their one loss coming to conference powerhouse Olathe North. More importantly, it appears that SM Northwest has hit their stride, feeding off the abilities of Matt Nowak, John Hauk, and KC Waterman.
2. Lawrence Free State
Since stumbling in week one, the Firebirds have looked more and more like the team their 6A state runner-up team from 2008. After putting on an impressive display in a victory over SM West Saturday, it looks like Free State is capable of beating anyone in the league. Their much anticipated battle with Olathe North in two weeks should sum things up well.
3. Olathe South
For once it was the Falcons who made a comeback to collect a victory. Olathe South used a versatile aerial attack to come back from a 14 point halftime deficit to defeat SM North. The Falcon's offense is legit, its just a matter of when they get things together on the defensive side of the ball.
Three Down
1. SM North
After a great 2-0 start, Kendall Kelly (below) and SM North have been less than impressive in the past two weeks. The Indians followed up a blowout loss to Lawrence Free State by blowing a 14 point halftime lead against Olathe South. Maybe the most disheartening thing for the Indians was that they were outscored 28-7 in the second half of their loss to Olathe South. 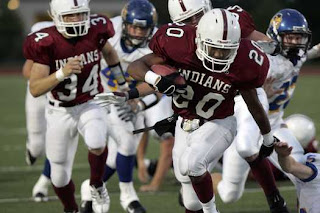 The Vikings inability to score has been their achilles heel this season and it finally caught up with them against Lawrence Free State. SM West had an ample amount of opportunities to match Free State's 22 points, but failed to do so on several occasions.
3. Olathe East
The Hawks have played, without a doubt, the toughest schedule of any team in the Sunflower League and now sit at a disappointing 2-2. Their four opponents have a combined record of 12-4 (two of the losses Olathe East dished out), but after playing Olathe North on Friday it appears the Hawks will have a much easier run to finish off the season.
Individual Highlights
**Olathe North's James Franklin carried the ball 25 times for 218 yards and two touchdowns. His touchdowns came on runs of 35 and 63 yards. Teammate Tre Walker (below) also chipped in 19 carries for 80 yards and a touchdown.
**SM Northwest quarterback Matt Nowak had another solid game, completing 10 of 13 passes for 195 yards and three touchdowns.
**Lawrence Free State running back Kirk Resseguie had 22 carries for 109 yards and two touchdowns. In the past two weeks combined Resseguie has rushed for 302 yards and six touchdowns.
**Olathe North's Jason Peete only had one catch Friday, but it was a big one--a 71 yard touchdown that put Olathe North up 14-0 on Olathe East. 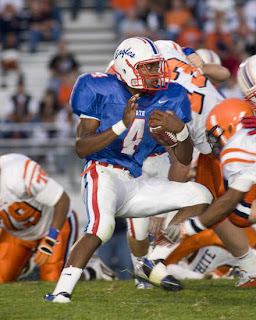 Week Five Power Rankings
1. Olathe North (4-0): The Eagles finished off their rival Olathe East fairly easily, and still remain the team to beat in the Sunflower League, and Class 6A.
2. Lawrence Free State (3-1): The Firebirds have been getting more impressive every week and with the exception of Olathe North, you really can't say that about any other team in the league.
3. SM West (3-1): SM West is still a top three team in the league, but their offensive woes need to be addressed.
4. Olathe East (2-2): The Hawks finished off their brutal stretch 2-2; winning out the rest of the regular season is a definite possibility.
5. SM Northwest (3-1): Two consecutive wins have been impressive by the Cougars, and it looks like they are coming together as a unit.
6. Olathe South (2-2): Unfortunately, offense generally isn't noted for winning championships. The Falcons have a great offense, but the improvement needs to happen defensively.
7. Olathe Northwest (2-2): Olathe Northwest had a nice 25-7 victory over SM South, but to get respect in Olathe they need to defeat their city foes.
8. SM North (2-2): The Indians are backpedaling after a great start to the season. Facing Olathe North this Friday probably won't help the situation.
9. SM South (2-2): The Raiders are working hard to capture their first respectable season in years.
10. SM East (1-3): The Lancers finally garner a victory for new head coach, Chip Sherman. Now let's see if they are capable of doing it again versus Leavenworth.
11. Lawrence (0-4): The Chesty Lions 0-4 start is quite the contrary to where their program was at 15 years ago.
12. Leavenworth (0-4): Leavenworth's battle to not be the worst Sunflower League team ever is getting tricky. They have now been outscored 195-6.
Posted by Eli Underwood at 10:06 AM

TheImpaler's picks for week 5.
Coming off of 6-0 last week.

OS-LHS O South's big comeback against SMN could propel them toward a playoff birth in their suddenly very ordinary seeming district...OS 33 LHS 7

LV-SME Can the Lancers make it two in a row? Against Leavenworth, yes...SME 31 LV 0

OE-ONW A game I would like to think could be intriguing but so far ONW has not shown me what I was expecting this year, OE bounces back...OE 29 ONW 14

SMNW-LFS Too many weapons for LFS and the game's in Lawrence. Only caveat is whether LFS is looking forward to big game next week against ON...LFS 27 SMNW 17

SMW-SMS Vikes had their chances galore last Saturday but poor execution, uninspired play calling and some head scratching officiating left SMW with their first regular season loss since 2007. How will they handle adversity? Against SMS and Lawrence the next two weeks the Vikings get back on track...SMW 35 SMS 0.