Top Five Player Ratings
Player Ratings are subject to change on a week-to-week basis
1. James Franklin, running back, Olathe North: Olathe North's use of Franklin out of the Wildcat Formation has been brilliant thus far. In their last outing, Franklin rushed for 218 yards and two touchdowns on 25 carries, with both of Franklin's touchdown runs coming out of the Wildcat. Franklin has now carried the ball 95 times for 857 yards (9 yards per carry average) and 11 touchdowns.
2. Camren Torneden (below), quarterback, Lawrence Free State: Free State's recent surge could probably be credited to Torneden's poise more than anything. In his last outing against SM West, Torneden rushed for 47 yards and a touchdown on 15 carries, and also completed 11 of 16 passes for 115 yards (and to be honest, that was probably the least impressive game he has had all season). Torneden gets a bump up on the list not only because of his stat production, but also because of the way he has led Free State since their week one stumble. 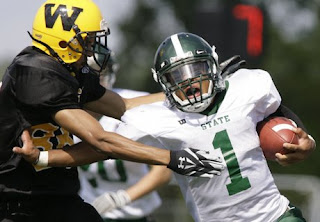 3. DJ Balazs, quarterback, SM West: Balazs slips one spot after his team's loss Saturday. In the game he completed eight of 18 passes for 126 yards, giving him 448 yards passing on the season. With SM West struggling offensively, it will be important for Balazs to be as productive as possible from the quarterback position--and if history is any indication Balazs is capable.
4. Matt Nowak, quarterback, SM Northwest: Nowak had another very impressive week, completing 10 of 13 passes for 195 yards and three touchdowns in leading his team to a 34-0 victory over Leavenworth. If Nowak continues to produce the way he has the past several weeks, he could see his name quickly climbing the list.

5. Brandon Willingham (below), running back/defensive back, Olathe East: By Willingham's standards, Friday night was probably a disappointment. He ran the ball 11 times for 73 yards and a touchdown, however, he has established himself as one of the most versatile players in the Sunflower League, and his statistics speak for themselves. He's near tops in the Sunflower League in tackles (44) and interceptions (2), and he has also rushed for 339 yards on 50 carries. More importantly he did so during the toughest four game stretch in the Sunflower League. From here out the Hawk's schedule appears much less difficult, and likely Willingham's production will increase.
Honorable Mention: Tre Walker, Olathe North; Lucas Vincent, Olathe North; Tanner Dutton, Olathe South; Kirk Resseguie, Lawrence Free State; John Hauk, SM Northwest; Kendall Kelly, SM North; Hayden Groves, Olathe East 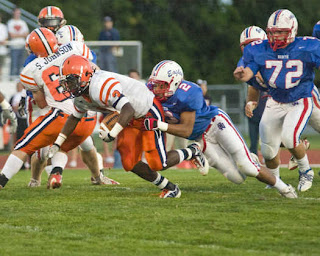 Week Five Power Rankings
*Power Rankings are subject to change on a week-to-week basis.
*See previous post for commentary on power rankings
1. Olathe North (4-0)
2. Lawrence Free State (3-1)
3. SM West (3-1)
4. Olathe East (2-2)
5. SM Northwest (3-1)
6. Olathe South (2-2)
7. Olathe Northwest (2-2)
8. SM North (2-2)
9. SM South (2-2)
10. SM East (1-3)
11. Lawrence (0-4)
12. Leavenworth (0-4)
Week Five Q and A
My take on the goings-on in the Sunflower League
Q: What has been the Sunflower League's most notable trend in 2009?
A: I find it interesting that the league has essentially divided itself into three sub-groups in the course of four weeks of football. You have the top group (Olathe North, Free State, SM West, Olathe East, and SM Northwest) who all seem to be a reflection of the dominant programs they have consistently fielded in the previous years. Here is a fun stat to go along with this upper group--they are a combined 10-0 against the other seven teams in the league.
The middle group consists of Olathe South, Olathe Northwest, SM North, and SM South. All of these teams have had very up and down seasons thus far. Do I feel that any of the four has potential to for a very successful end to the season? Yes, very much so. Olathe South is a couple blown leads away from being 4-0, and all three of the other teams have shown off some impressive play in the first four weeks. However, all four teams have a ways to go to truly prove their worth.
The lower group has put together a pretty poor display so far. Lawrence appears (at least on paper) to have the talent to be at least a .500 team in the league, and SM East has a decent collection of talent as well. Leavenworth on the other hand is really struggling to get by this season. Regardless, it has been four weeks and these three teams are a combined 1-11, with the one winning coming within their trio.
Q: How many Sunflower League players have the potential to be Simone Award candidates come late fall?
A: As of right now, I would say James Franklin is in the drivers seat for the award, and Camren Torneden is steadily putting in a decent resume to at least be in the top four of the voting. Both players meet the initial two criteria: great stats for a top rated football program. The third criteria, a state championship (or at least an appearance) will be determined later. But for now both players credentials are looking very promising, and a few other players from the league may enter their name into the race in the coming weeks.
Q: How bad is this 2009 Leavenworth team (below)?
A: As far as I can tell they are on pace to be one of the worst Sunflower League football teams of all time. They have only scored one touchdown in four games (and they missed the extra point on that touchdown). Keep in mind I'm not trying to harp on the hapless Pioneers, but rather point out some facts that currently hold true. Also, they still have SM East and winless Lawrence on the schedule, so decent chances for success are still to come. 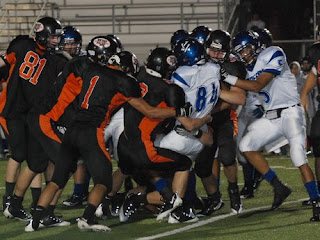 Q: How good is this 2009 Olathe North team?
A: From what I have gathered, and based on the statistics that they have put forth, this year's Olathe North squad is easily the best team they have had since 2004. Olathe North appears to have more speed, size, and talent than any other team in 6A...keep in mind the 2004 team looked invincible until the 5A state championship game...regardless, their true level can't be told until all is said and done, but so far they are doing a great job of convincing everyone of their worthiness.
Posted by Eli Underwood at 3:41 PM

Eli, I love the blog, it's great to have a source for Sunflower League news and info. I think however it is counter-productive to keep pointing out how bad Leavenworth is over and over. Let's remember that a lot of these kids are the children of our service men and women and that they ship in and out of Leavenworth every year or two(especially in these times). It's virtually impossible to build a winning program with kids who don't stay in the prgram for more than a year or two. LV doesn't have the ability that Coach Callaghan does to build kids from 4th grade onward. Yes, obviously they're not competitive but let's keep in mind why and maybe not focus on it quite so much.

I gotta say I went up to LV for the SMW-LV game and those kids played hard and didn't quit and moreover, their fans were VERY supportive. I know if SMW were behind 35-0 at half we'd be sitting on our hands (if we were even still in the stadium).

Now Lawrence, on the other hand....just kidding.