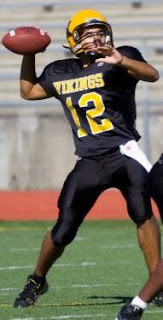 Year: Senior
Stat to Note
Last season, in a week five matchup against Lawrence, Williams passed for 182 yards and two touchdowns in SM West's 55-21 win.
Scouting Report
As a first-time starter last season, Williams battled the inconsitencies that haunt most new quarterbacks.  One week he would look like an all-Sunflower performer, and the next he couldn't manage SM West's offense to save his life.  SM West is banking on the fact that most of the growing pains are over for their quarterback as they head into the 2011 season.
Williams completed 42 passes for 954 yards and 10 touchdowns as a junior.  His 22.7 yards per completion was quite indicative of his passing game overall.  He completed many big-hitters, but often times his inability to complete shorter touch passes hurt SM West.
Having lost most of their top receivers to graduation, Williams will be throwing to a completely new unit this year.  How much that affects his passing remains to be seen.  However, with a talented running back in Tre Burt absorbing much of the defense's attention, Williams will be able to operate with less pressure while relying on his own experience from last year.
Posted by Eli Underwood at 4:57 PM

He has a year under his belt. I think he's going to be a lot better. Should have a good offensive line, quick and well coached. Defense looks good, Old Frase is back!

Who is Frase? The guy who used to be in Texas with Wier? Anyone know if McCall has any talent at BVN?

I miss the trash talk and have pledged to only provide correct and valid information.

Why do you care about BVN?

I think Williams has matured as a starter over the off season, and will show this year in his decision making. He'll most likely run more with the loss of some senior recievers.