Players to Watch in 2009: Lucas Vincent 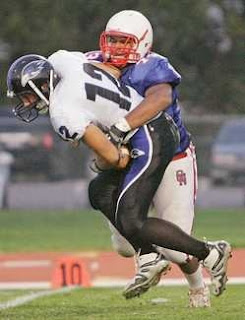 Name: Lucas Vincent
School: Olathe North
Year: Senior
Position(s): Defensive line
Height: 6'3"
Weight: 270 lbs.
Notes: Vincent(far right) will go into the 2009 season with perhaps bigger expectations than any other player in the Sunflower League. Lucas committed to Missouri in April, but not before he had received offers from Nebraska, Kansas State, Kansas, Wisconsin, and San Diego State.
As a junior in 2008, Vincent teamed up with fellow defensive lineman Kevin Young on one of the most stifling defensive fronts in the state. Vincent totalled nine sacks and collected over 40 tackles and was named First Team All-Sunflower League.
What makes Vincent so special as a defensive lineman? Perhaps it has do with his oustanding abilities on the wrestling mat. As a sophomore in 2008, Vincent took second place in 6A at state in the 285+ pound weight division. This past year, Vincent took the 6A title in the 285+ pound weight division.