The high school football season has finally arrived. Missouri teams kicked off their season's this past Friday, but the Metro isn't truly in full swing until Kansas teams hit the Friday Night Lights for the first time. Since no games have taken place yet, this post will be geared completely towards the upcoming week and season.

Top 5 Player Ratings
*Player ratings are subject to change on a week-to-week basis
1. Camren Torneden, quarterback, Lawrence Free State: Torneden starts the season as #1 on the list for a variety of reasons. As a junior in 2008 Torneden posted 1,362 rushing yards, 1,042 passing yards, and 23 combined touchdowns. He also helped lead Lawrence Free State to the 6A state title game. With a year under his belt at the quarterback position Torneden could be primed for an even bigger 2009.
2. James Franklin, running back, Olathe North: Franklin has the best supporting cast in the Sunflower League, and it should show as the season rolls along. In two seasons as Olathe North's primary ball carrier Franklin has totalled 3,113 rushing yards and 38 rushing touchdowns. His five consecutive 200+ yard rushing games to end the 2008 season could be a strong indication of how well he will do this upcoming season.
3. DJ Balazs, quarterback, SM West: Balazs, like Franklin, is a seasoned veteran in the Sunflower League. Balazs' has a chance to significantly improve on his career record as a starter of 13-5, and it should be expected in his third year under center for the Vikings. It will also be interesting to see if Balazs can keep the top Quarterback Rating in the Sunflower League for the second season in a row (he accomplished the feat as a junior after passing for 1,024 yards and 15 touchdowns).
4. Lucas Vincent, defensive line, Olathe North: One could make the case that Vincent will be equally as important to the Eagles on defense as Franklin will be on offense. In fact, Vincent will likely be getting game planned around the entire season. The mammoth Vincent (6'3", 275 lbs.) will be drawing even more double teams in 2009, but don't expect his production to be turned down any. 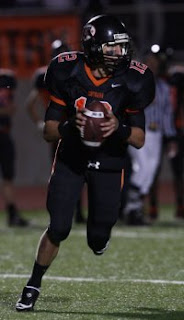 5. Matt Nowak, quarterback, SM Northwest: Nowak (right) is truly the dark horse of the first batch of player ratings, but SM Northwest's success in 2009 is highly dependent on how well Nowak performs from the get-go. Nowak took the reigns as the starting quarterback for the Cougars in the third week of 2008, and responded by passing for over 820 yards, while leading SM Northwest to six wins to finish off the season. With the graduation of a very strong senior class from the past season, it will be key the Nowak performs well for the Cougars. If last season is any indication he could be in for a pretty good season.
Team Power Rankings
*Team power rankings are subject to change on a week-to-week basis
1. Olathe North (0-0)
2. Lawrence Free State (0-0)
3. SM West (0-0)
4. Olathe East (0-0)
5. SM Northwest (0-0)
6. Lawrence (0-0)
7. Olathe South (0-0)
8. SM East (0-0)
9. Olathe Northwest (0-0)
10. SM North (0-0)
11. SM South (0-0)
12. Leavenworth (0-0)
**SM Northwest and Lawrence High have switched positions since my initial preseason rankings. I feel the presence of skill position players Nowak and John Hauk will make the transition into 2009 more lucrative for the Cougars.
Poll Watching
A look at where Sunflower League teams rank in local polls
Hovpensports.com Class 6A Top 10
2. Olathe North
3. Lawrence Free State
7. SM West
Kansas City Star Big Class Top Five
2. Olathe North
KC Metro Sports Top 25
2. Olathe North
8. Lawrence Free State
19. SM West
25. Olathe East
Kansasprepfootball.com Class 6A Top Five
1. Olathe North
The Olathe News Top 10 on the Kansas side of the Metro
1. Olathe North
4. Lawrence Free State
5. SM West
6. Olathe East
Posted by Eli Underwood at 6:14 PM