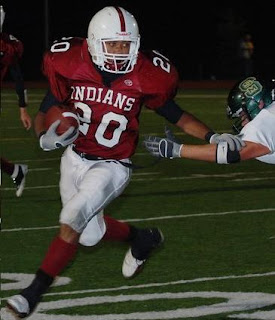 State to Note
Kelly was one of the few bright spots during SM North's 2-7 season in 2009. The sophomore rushed for 609 yards on 148 carries.

Scouting Report
New SM North head coach Dennis Grayless has quite a task at hand trying to rejuvenate the Indians football program. The team hasn't made the playoffs since 2003, but it's players like Kelly that Grayless will be relying on.

Kelly was one of the few sophomores in the Sunflower League who had a feature role with their team last season, and he did pretty well rushing for over 600 yards. Assuming the junior receives enough carries, he should rush for over 1,000 yards this upcoming season. Kelly's excellent balance and decent speed makes him a threat in the return game as well.

SM North lost some playmaker like Arthur Rucker to graduation, but overall the program's talent pool didn't lose too much. Kelly will be teaming up with senior-to-be Kyle Goodburn to try and make big strides in year one for Grayless.
Posted by Eli Underwood at 3:43 PM

How can you call Arthur Rucker a playmaker? He was third in stats for the WRs at North. You, like most people, believe the hype because he's been playing varsity since he was a freshman (unsuccessfully by the way) and the fact that he is a 6'1 black guy.