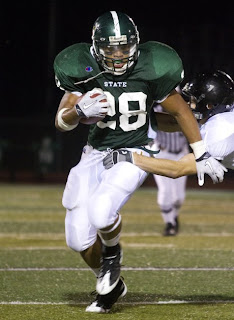 Week Eight Matchups
All game times 7 p.m. unless otherwise noted
Olathe East (6-1) at Blue Valley Northwest (1-6) (Thursday Night Game)
Olathe East didn't put on their best performance of the season last week, and it was a similar lapse to their loss against Lawrence earlier in the season. The Hawks can't afford any more of those from here on out. Blue Valley Northwest is a team known for throwing together late-season heroics, and they were fairly competitive last week in their loss to Olathe South.
Lawrence Free State (4-3) at Olathe North (6-1) (Thursday Night Game)
Olathe North has had the luxury of playing their most competitive opponents at home this season, and that trend continues this week as they host Lawrence Free State. The Firebirds' offense (with the help of Henry Vaeono, above) had its way with Olathe Northwest last week, but Olathe North's defense is at another level--and the Eagles match up speed-wise with the Firebirds. The Free State offense has also proven ineffective against top defenses (combining for a mere 20 points against SM West and Olathe East). This game will be a huge confidence booster for the winner as playoff time nears.
SM Northwest (3-4) at Leavenworth (1-6)
Can Leavenworth make it two in a row? And just how long can Stephen Mangelsdorf continue his hot streak for SM Northwest? We'll get answers for both questions in this matchup between the two District 1 teams with 1-0 records. The crazy thing is that if Leavenworth were to somehow pull an upset in this game they would basically be guaranteed a playoff spot.
SM South (2-5) at Blue Valley North (2-5)
Both of these teams need a victory or else their playoff hopes for 2010 will be flushed down the toilet. With that being said, expect both coaches to pull out all the stops in attempt to claim a victory. SM South was competitive against SM West last week and it could be a good sign for the Raiders as they take on an opponent that is equal record wise.
Lawrence (3-4) at Olathe Northwest (2-5)
Much like the aforementioned game, the loser of this contest will not make the playoffs. If Lawrence wins they will be facing Free State in week nine with playoff implications on the line--which would make the rivalry more meaningful than it has been in years. Olathe Northwest has a tall order, should they beat Lawrence. They would have to play at Olathe North in week nine and win to keep their playoff chances intact.
SM North (0-7) at Wyandotte (2-5)
Leavenworth collected their first win of the season against Wyandotte last week, and there's no reason why SM North shouldn't do the same this week. SM North is starving for a victory (they currently hold a 14-game losing streak). A win would satisfy that need, and probably also set up a week nine matchup against Leavenworth for a spot in the playoffs.
Blue Valley West (1-6) at Olathe South (5-2)
Blue Valley West gave Olathe East a scare last week, and now they will travel to Olathe South to see if they can close out a victory. The Falcon's have quietly churned out five-straight wins and look to be right on target for making the playoffs--that is, assuming they don't take Blue Valley West lightly. Also, the game is being played at ODAC, an unfamiliar field for Blue Valley West, and so that may give the Falcons an added edge.
Game of the Week
SM East (6-1) at SM West (6-1)
There is no high school football archive on the web that goes back far enough to tell us the last time SM East beat SM West. We know it hasn't happened since 1998, which is about as far back as any archives go. Even in years when SM East was the favorite--like 2001 when the Lancers went 6-5 and the Vikings went 3-6--SM West has managed to claim victory. The rivalry trophy, the "Nut Cup" hasn't graced SM East's campus in so many years that most Lancers don't even know it exists. This year's game is perhaps the most evenly matched contest we've seen between the two teams in the past decade, and it should be a great game. Metro Sports will be broadcasting the game live to the metro on Friday night.
Photo courtesy the Lawrence Journal-World
Posted by Eli Underwood at 12:41 PM

Perfect again last week, up 4 games on Olathe News for the year. This week really the last of the big games being played, only the big SMN-LV showdown for the final playoff spot next week. LFS-ON, BVW-OS and of course the big one SME-SMW this week.

SME (6-1) @ SMW (6-1) This is the big one! Vikes can claim first solo league title since 1988, East can claim a share for the first time since, yes that's right, 1964. Hardest game to pick this year, both teams have been up and down but even when down have usually done enough to win. I think East is the smarter team on the field and will have better execution, whereas West has more team speed and a kicking game advantage. East's normally solid D was shredded last week but West's high flying O didn't produce much against SMS. West is very turnover prone, gave up 1 fum and 1 int last week plus put the ball on the ground 3 other times but got it back. Schrock will gash the Vikes for a couple of big plays I'm sure. Can Armani do enough to take the pressure off the Westside running game? I'll go with the Vikes to come from behind and win it on a late FG....SMW 30 SME 28

SMN (0-7) @ WYAN (2-5) Clearly we saw last week the Wyandotte has no business playing in 6A and the Indians will get their first win and set up, yes that's right, a PLAYOFF showdown with LV next week...SMN 29 WYAN 16

LAW (3-4) @ ONW (2-5) Lawrence appears to have quit for the year being murdered in the last two games - giving up 96 points. ONW is still playing hard but coming up short most of the time. I like the Ravens at home here...ONW 24 LAW 17

LFS (4-3) @ ON (6-1) The battle for the district championship for sure. Free State was able to get their offense cranked up again a little last week, hopefully they can continue to improve this week. Still, I've got to go with the Eagles....ON 33 LFS 31

BVW (1-6) @ OS (5-2) I know I've vacillated a couple of times on this critical game, the winner probably headed for a playoff spot to play the #3 seed. I'm going to go back to my original thought on this game, the Jags have too much offensive punch for a Falcon D that remains suspect in spite of only giving up 10 last week. Some bulletin board material for Clayton, I look for West to win a wild one here... BVW 48 OS 45

This is the respond to all those loser Olathe North haters.....Your mamma!
The Eagles went on their rages and murder the Firebirds 38 to 7! And please do compare it from Olathe East Vs Law Free State 17 to 0....see the difference???

Eagles is the superior of the Sunflower League ACCEPT IT!!!!!!

Yall know the fact that the Eagles has been #1 since they decapitated Leavenworth 76 to zip!

Now for the last time.....STOP KISSING UP THESE ORANGE ASSES!!!!!

-the Hawks hater and now Vikings too!

I forgot that beating Leavenworth was some sort of an achievement now.

Please don't think all O-North fans are like this idiot that keeps running his mouth. I will say Olathe North looked like a diffrent team tonight and look to be playing their best football at the right time. Go Eagles!

This is the respond to "8 TIME STATE CHUMPS"...

No one want to hear anything from a "former waterboy"! So, shut up!

-the Hawks hater and now Vikings too!

A good game for the Eagles for sure, but you have to admit that Free State has been a very different team on the road than at home this year. At home they beat O South, and played SME and SMW very close, on the road they get skunked by OE and throttled by ON. The question for the Eagles is can THEY do it on the road since there is probably a 2/3 chance they won't be the #1 seed as it looks more and more like we're going to have three 8-1 teams with seed randomly determined plus an excellent chance that the loser of tonight's SMW-SME game would HOST the #1 seed in the scond round.

No one wants to hear anything from the "Hater" please go away.

Is the hater a HS kid? Apperently you don't play and never have since you were watching the game.

This is the respond to Thelmaler...


Precisely, that what I was trying to tell to this "8 Time State Chumps" that the Hawks has less competition this year and the Hawks will not be playing neither SME and SMW and the Eagles beat them smoothly....

And to those commenters just above me.....blah you need to get life...and you, please go away no one want to hear anything from the waterboys nor HS drop out either.

They still won 25-0. Who cares who they played before or after until the Eagles go out and either beat them or win the state championship. I just dont think the rankings matter and we don't deserve to be #1.

My brothers and i have 5 state championship rings between us. How many do you have hater?

"Liar, liar pant on fire" and it is so sad that even the waterboys do receive the state champion ring and lied that they ever play!

-Olathe East Hawks haters and will get you all Eagles tratiors!

Can you just stop with your unintelligent contributions to this blog?