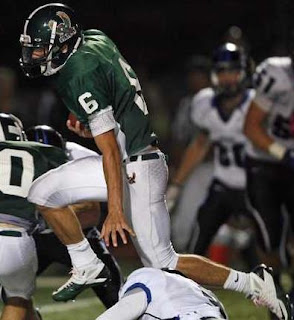 Willingham certainly didn't have his most stellar game of the season, and it was actually fellow running back Austin Fulson whose late touchdown put the Hawks ahead for good. Regardless, Willingham holds the top spot for another week, but it is being challenged.
2. Dylan Perry, Quarterback, Lawrence Free State
Week Seven: 13-of-24 passing, 184 yards, 3 TDs; 19 carries, 96 yards, 1 TD
Perry (above) played arguably his best game of the season on Friday. His three first half touchdown passes virtually sank any hopes Olathe Northwest had of pulling the upset, and his 62-yard touchdown run in the third quarter put the exclamation point on the victory.
3. John Schrock, Quarterback, SM East
Week Seven: 15-of-19 passing, 209 yards, 2 TDs; 9 carries, 56 yards, 3 TDs

Schrock jumps a spot in this week's ratings after another performance in which he really willed SM East to victory. Obviously Schrock has a great supporting cast, but his five touchdowns were as good as we've seen from anybody all season.
4. Adonis Saunders, Running Back, Olathe North
Week Seven: 11 carries, 151 yards, 1 TD
At 10.74 yards per carry, it would be really interesting to see what kind of numbers Saunders could produce if he received the amount of carries James Franklin did last year. In actuality, it's his big plays that have taken away from his carry totals.
5. Stephen Mangelsdorf, Quarterback, SM Northwest
Week Seven: 11-of-13 passing, 133 yards, 3 TDs; 1 rushing TD
I debated whether to promote Victor Simmons back onto the list after his big game on Friday--but that would mean that Mangelsdorf would be dropped. After his seemingly perfect passing game against SM North there is no way he could be taken off the list. Mangelsdorf's production has been excellent and the team hasn't suffered a drop off from Matt Nowak last season.
Honorable Mention: Victor Simmons, Tre Burt, Austin Fulson

1. Olathe East (6-1)
2. Olathe North (6-1)
3. SM West (6-1)
4. SM East (6-1)
5. Olathe South (5-2)
6. Lawrence Free State (4-3)
7. SM Northwest (3-4)
8. Lawrence (3-4)
9. Olathe Northwest (2-5)
10. SM South (2-5)
11. Leavenworth (1-6)
12. SM North (0-7)
Eli's Week Eight Q & A
Submit your Sunflower League questions to Eli at eunder@ku.edu
Q: Why don't Sunflower League teams play more out of conference games since only 6 games count towards the league title? - Ben
The answer I will provide is based mostly on here say. I've never officially read out any rules or regulations for the governing of the league, but I've collected bits and pieces about the scheduling through the years. It is also important to note that in beginning in 2008 the Sunflower League made "league games" consist of the last seven games against SL opponents in even years, and the first seven in odd years. Prior to 2008, there were only six "league games."
Back to the out-of-conference issue--prior to the 2004 season the Sunflower League was an 11-team league. To my knowledge, team schedules rotated so that they would play all of the other 10 league opponents every two years. So, most team's had their five league opponents, and three district games (all of which included at least one Sunflower League team so that every team would play a minimum of six Sunflower League opponents), and one out-of-conference game of their choice. That explains why teams played schools the likes of Rockhurst and Lee's Summit in the late 90s and early 2000s.
In 2004 Olathe Northwest was added at the varsity level in the Sunflower League, which bumped it to a 12-team league. The rotation was then worked out so teams would play all of the other 11 teams every four years. As far as I've ever known, the Sunflower League simply instituted a full six game slate of pre-district opponents so that there wouldn't be a situation in which out of conference games would interfere with a team getting their six league games in.
Once again, don't take this as gospel--it's simply what I have collected through the years. I think it would be great if out-of-conference games were allowed again in the Sunflower League. It really prohibits the league's reputation when the only non-Sunlower or EKL opponent for any team is the state championship opponent. If Sunflower League teams were able to branch out and play opponents from other leagues and states I think the overall level of play in the league would increase.
Stat Check
Passing Yards
John Schrock, SM East: 1450, 8 TDs
Stephen Mangesldorf, SM Northwest: 1,098, 10 TDs
Brad Strauss, Lawrence: 961, 9 TDs
Dylan Perry, Lawrence Free State: 871, 6 TDs
Armani Williams, SM West: 712, 8 TDs
Alex Forslund, SM South: 625, 5 TDs
Kyle Goodburn, SM North: 567, 3 TDs
Corey Kipp, Olathe Northwest: 512, 3 TDs
Frank Suerer, Olathe South: 325, 4 TDs
Trent Kuhl, Olathe East: 282, 1 TD
Rushing Yards
Brandon Willingham, Olathe East: 1,036, 13 TDs
Nick Sands, Olathe South: 994, 10 TDs
Adonis Saunders, Olathe North: 988, 13 TDs 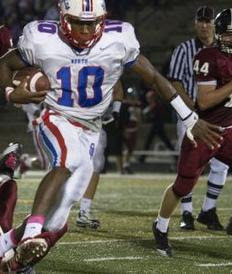 I've never understood the scheduling either but Eli is incorrect on every team playing every team every other year. I know all the SM schools must play all other SM schools every year and same for Olathe. SMW, however prior to this year's game against ON had not played the Eagles since 2005. We also never seem to get to play LV...in the 9 years I've been following Viking football, I am fairly certain LV has only come to our place to play once and we've gone there once or twice. The biggest problem is this ridiculous 4 team district system in which no one really seems to know how the teams are assigned. Certainly no effort is made to maintain competitive balance. District 1 has four teams with 4 wins between them coming in but I must apologize for saying it is the worst district ever becasue District 7 THIS YEAR has four teams with only 3 wins between them. Two of those teams get playoff spots while two out of Junction, Manhattan, Topeka and Washburn Rural, all at least 5-1 coming in to districts will be left out. We need to go to 8 team disctricts. This may mean abondoning the 'conference' concecpt altogether. Play your last 7 district games and then you have two weeks open to play anyone you want (SMW - Dodge City? ON-Wichita Heights?). Sure that means all the BV schools don't get to play each other, oh well. Quit splitting off your schools so you have schools in 3 different classes.

After a little more research I've found it's a four-year rotation. SM West, for instance, didn't play Olathe North from 2007-2009, but in the fourth year, 2010, the teams met. Same goes for SM West and Olathe South. The two teams didn't play during the regular season from 2004-2006, but in year four, 2007, they met. This way, I believe, on the basis of a four year high school term every school faces every other SL opponent at least once. And there are caveats to the school district rules, if district play interferes. SM West didn't play SM North in 2007.

Eli, that makes sense then. I'm a senior at Olathe South, and we haven't played Leavenworth since 2007, my freshmen year, when we were still in the junior highs. As far as I know, thats the only Sunflower League team my class hasn't played against.

Thanks, Eli. It looks like I was wrong about SMW and LV, looking back at KS prep football, we played them in 2007,2008 and 2009 but I'm sure only one of the games was home for us. Forgettable games I guess.

Anyway, if say the three 6A BV schools, the 4 Olathe schools and LV were in one 8 team district, then the 5 SM Schools, the Lawrence schools and WYAN in another. You take the top two from each district and the next four best overall records, I bet you'd almost never wind up with teams with losing records in the playoffs. Plus you could schedule some great non-district games, like say each team has to play a two year home and home with one school from the other East district and one team from one of the West KS districts. That way everyone only plays 6A schools so the playing field is level. KSHSAA will never do it though, it makes too much sense.

TheImpaler, Districts are done according to geographic proximity, usually from North to South. BTW, love your comments and picks every week.