Friday night turned out to be one of the more epic Sub-State contests the East side of the 6A bracket has seen in years. The action got interesting in the first quarter when Olathe North's James Franklin uncharacteristically fumbled the ball just inside the Blue Valley 10 yard line. Later on in the quarter Tre Walker botched a punt that Blue Valley was able to recover. The Tigers took advantage of the second fumble when Anthony Abenoja completed a pass Jacob McDermott for a 28 yard score. Olathe North was able to tie the score in the second quarter when Walker completed a touchdown drive with a two yard plunge.
The third quarter played out with neither team scoring. Early in the fourth quarter Abenoja once again led the Tigers down the field after yet another Olathe North fumble. This time Abenoja hit PJ DeBey (bottom) on a 13 yard pass to help Blue Valley gain a 14-7 lead.
With time quickly winding down in the fourth quarter Olathe North compiled a nice drive to set up a one yard touchdown run by quarterback David Blazevic. However, in a all too familiar scene for the Eagles, kicker Jared Morss botched the extra point, and kept Olathe North from evening the score (Morss' missed extra point ultimately prevented Olathe North from defeating Blue Valley in 2008).
Olathe North was able to regain possession and drive all the way to the Blue Valley 16 yard-line with a mere 14 seconds remaining in the half. This time, Morss delivered on the 33 yard field goal attempt (below). The score put Olathe North up for good, 16-14.
For the second year in a row Blue Valley fell just short of advancing to the 6A title game, despite a valiant effort and one of the biggest last season turnarounds in Johnson County high school football history. Olathe North advances to their first state championship game since 2004. 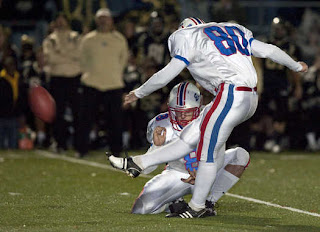 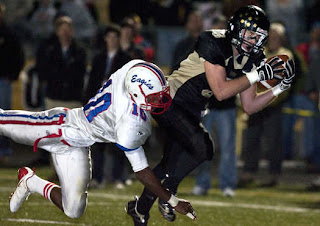 It is really too bad that this game was decided by a horrible call by the official in the end zone. A late call at that! If you were there to see this game...it was the most toughest battles I have seen in high school football. But clearly, Blue Valley won that game...the field goal wasn't the win...the bad call by the official calling pass interference...pushing in the back by the BV defender when he was clearly in front of the receiver...terrible...terrible...it was an injustice to the effort and tenacity of the BV players..especially their defense. BV was clearly the winner of this game...and for many that game was the STATE CHAMPIONSHIP!!!

Well, I'm sure there are two sides to that argument, but I definitely agree that this game was more or less the 6A title. The state championships results on Saturday proved that 6A East was much stronger this season. And for what it's worth, Blue Valley's late season turnaround will be a rallying cry for alot of teams for years to come. Its not everyday a team goes 1-6 only to go win five straight in the fashion they did.