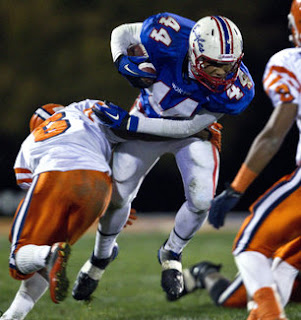 Tanner Gentry
Olathe North
Position(s): Tight End/Defensive End
Height: 6-foot-4
Weight: 210 lbs.
Class: Senior
Stat to Note
In his team's week eight victory over Lawrence Free State, Gentry carried the ball two times for 75 yards and a touchdown, and caught two passes for 73 yards and a touchdown.
Scouting Report
Gentry was one of the Sunflower League's premier juniors in 2010, and his exclusion from a first or second team all-league selection came as a bit of a surprise.  Nonetheless, it will be a motivating factor for Gentry in 2011 as he looks to dominate on both offense and defense.
Gentry recorded 11 sacks from his defensive end position in 2010, and he was one of the best pass rushers in the league after SM Northwest's Drew Goodger.  Gentry might be the player that steps up and takes the title as the best pass rusher this season.
Offensively his presence may be even more noticeable.  Gentry's combination of size and speed create matchup problems for most teams--linebackers can't keep up with him, and most defensive backs are too small to cover him very well.  He's a nightmare to plan for, and when he breaks into open field he's as good as gone because of his high end speed.
Posted by Eli Underwood at 3:29 PM

i thought he was a reciever

He's a good player. One of the reasons O North should be the favorites going in.

Best pash rusher next season? Olathe East's Matt Baltimore is also a pretty good pash rusher too. He had like 17 tackles for loss last season.

I agree Matt Baltimore is a Stud, and probably the best defensive lineman in Olathe.

Eli, I surprised you don't have anything about Brandon Claypool resigning at Shawnee Mission South.

it didnt say the BEST d end, it said the best pass rusher this year which behind goodger he was last year