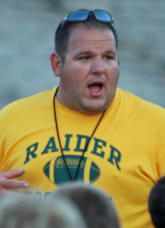 According to various sources, SM South's Brandon Claypool has reportedly tendered his resignation as the head football coach.

Claypool took over the heading coaching duties at SM South in 2006, after spending the previous two seasons as the head coach at Turner.

Claypool was 10-36 in five seasons at SM South, with arguably his best team being his 2009 squad that went 3-6.
The resignation leaves the SM South football program in a peculiar position as they prep for the upcoming season.

The Raiders, a traditional laughing stock in the Sunflower League, haven't fielded a winning record in over 13 years despite brief influxes of talent throughout that period.
Posted by Eli Underwood at 3:03 PM

what about the Olathe North O-line coach? He's gone

haha ^ so?? why are people so up norths butts who cares?? its a freakin o line coach...

I know you're from SM West, but, wouldn't:

"The Raiders haven't fielded a winning record in over 13 years despite brief influxes of talent throughout that period."

without the laughing stock comment been a bit more professional?

who will they hire???

This is a private blog, he doesn't have to be "professional"

I have heard they have quite a few applicants but I haven't heard any names. I would think some local assistants might look at it but some schools have probably already started working on the upcoming season.

No one wants this job...it is a career ender, maybe the guy who is at Leavenworth and stole money from the aquinas football camp will apply.

I read Lonergan from SM West is new head coach at SMS as of yesterday.